Mary Marvel, World's Mightiest Girl, and the Quarrel of the Gnomes! (Table of Contents) 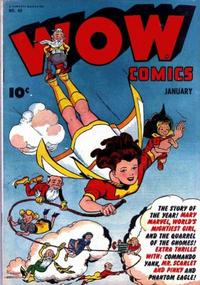 The Quarrel of the Gnomes (Table of Contents: 3)

No Time For Torture (Table of Contents: 4)

All the World's a Stage (Table of Contents: 6)

Genre
superhero
Characters
Mr. Scarlet; Pinky; Louie Chips (villain)
Synopsis
Louis hears that Harry Fox is moving in on his rackets, so he hires an actor to take hia place and get bumped off instead of Louie, then Louie can put the finger on Harry. Unfortunately, the actor packs a rod and bumps off Harry first, then go back to Louie's place and kills him and assumes his identity.....that is until Scarlet intervenes.
Reprints

The Secret of the Vial (Table of Contents: 7)