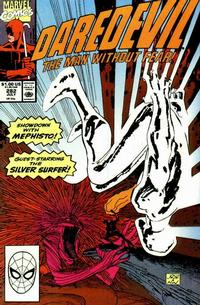 Devil's Advocate feature logo in this issue is the same font, but colored blue rather than red.