Armor Wars II In the Grip of Death! (Table of Contents)

"On the Byrne Robotics message board, John Byrne stated that the cover for Iron Man #258 (1968 series) was originally penciled by John Romita Jr. as the first page of the issue, but it was decided that it didn't accurately reflect what was going on in the story, so the first page was
redrawn and the original was inked by Byrne to be used for the cover." (e-mail from Roger Ott, October 9, 2007) 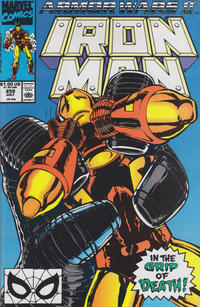 Armor Wars II, Part One. "if you take the first letter of each word in the title (and in the
next issue), they spell LASER, which was Byrne's sneaky way of telling us who the villain was." (e-mail from Roger Ott, October 9, 2007).