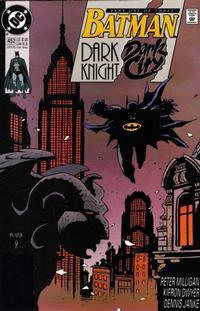 Job Number
G-5590
First Line of Dialogue or Text
From the confessions of Jacob Storkman 1793.
Genre
superhero
Characters
Batman [Bruce Wayne]; Commissioner James Gordon; John Constantine; Thomas Jefferson (cameo); Alfred Pennyworth; Riddler [Edward Nigma] (villain); Barbatos [Hyper-Adapter] (villain); Doctor Hurt [Thomas Wayne] (Bruce Wayne's ancestor from 1700s, not his father) (villain)
Synopsis
Batman is led through a labyrinthine urban maze by his old nemesis the Riddler, who seems to have changed into an abominable monster with one purpose: to drive Batman insane. As, in the present day, Batman takes on the Riddler's challenges, while in the past the story also explores the connection between Gotham City and the occult.
Reprints
Keywords
history; human sacrifice; occult; presidents

One of the books on which the library guard is standing is 'Seduction of the Innocent' by Dr. Fredric Wertham, a 1950s study of the influence of comic books on the youth of the time, blaming them for causing juvenile delinquency. It created alarm in parents and led directly to the formation of the Comics Code Authority.