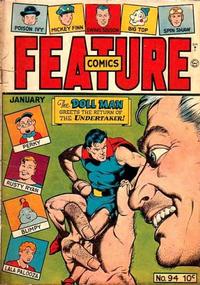 The Undertaker Returns (Table of Contents: 1)

Genre
superhero
Characters
Doll Man [Darrel Dane]; Martha Roberts; Professor Roberts; Sgt. Swenson (introduction, a Mountie); The Undertaker (villain)
Synopsis
The Canadian Mounties fail to cope with fur robberies and a coat made of stolen furs is bought by Dr. Roberts to his daughter. Then Doll Man goes north to find out more, ending with the Undertaker going down in a boat in frozen waters.

Originally credited "Al Bryant ?", but tilting figures with a long upper body and awkward way of standing and walking, some wild eyes, and also broad shoulders and narrow head on stretched neck are all pointing to Zolne. He is credited on both pencils and ink on this feature by Jerry Bails' Who's Who, but inking may vary.

[The Balloon Shooter] (Table of Contents: 2)

First Line of Dialogue or Text
And if I could just get carfare to Yonkers--
Genre
humor
Characters
Vincent Palooza; Lala Palooza
Synopsis
Vincent tries being honest for a change when he asks Lala for money. The result is the same: no money.

[Captured by the Japanese] (Table of Contents: 11)

Quackenbush is credited on pencils and ink on this feature by Jerry Bails' Who's Who, and the many short figures and narrow heads point to him. Uncertain inking when compared with his signed stories.

First Line of Dialogue or Text
We two tired performers need a change...
Genre
humor
Characters
Butch
Synopsis
Butch goes for a walk with his pet pig. He blindfolds the animal to spare its feeling as they pass a butcher shop, but the pig then goes on a rampage.

First Line of Dialogue or Text
The boss says my makeups have been too corny...
Genre
humor
Characters
Butch; Boss Jeff Bangs
Synopsis
Butch models his new comic makeup on a man he sees on the street. Unfortunately, this man is about to lend the circus money, and changes his mind when he sees Butch's parody.

[The Liberation of Logoro Island] (Table of Contents: 14)

The same art as in several Manhunter stories in Police Comics credited to Riss. Notice the flying figure getting a punch, which appears in many of those stories too.