The on-sale date is from the publication date recorded in the Catalog of Copyright Entries, Part 2, Periodicals, 1945, New Series, Vol. 40, No. 4. 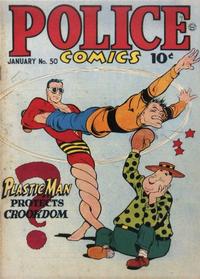 [The Kindness Ploy] (Table of Contents: 2)

First Line of Dialogue or Text
These yere books the civil-y-yans sends us is swell!
Genre
humor; military
Characters
Dewey Drip
Synopsis
Soldier Dewey, stationed on a Pacific island, reads a book about demanding a raise from one's employer and tries it out, but the Army isn't impressed.