none (Table of Contents) 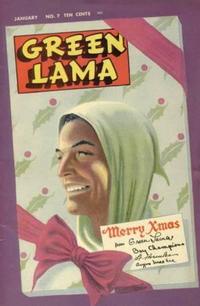 The Turn of the Scrooge! (Table of Contents: 1)

Genre
superhero
Characters
The Green Lama [Jethro Dumont]; Tsarong; Skivvy; Tommy; Amos Pinchpenny (villain, introduction)
Synopsis
The Lama has to battle a group of thugs hired to dump the catches of the local fishermen because he holds the mortages on the boats, and wants them to literally work for slave wages for him.
Reprints

Christmas story. The story is done in a painted or wash style very similar to that which Bill Everett did on the first Sub-Mariner story. The last 1/3 of the last page has an Angus Mac Erc illustration (by George Roussos) and promotional advertisement for the Green Lama Club.

Genre
superhero; humor
Characters
Lieutenant Hercules [Wilbur Klutz]; Merlin; Pierpont Square; Attila the Hun (villain)
Synopsis
Wilbur discovers that he has stayed too long in Comic Land and can no longer revert back to his secret identity. Meanwhile, Merlin is approached by a rich couple seeking a servant and conjurs up Attila the Hun to work for them, unaware that Attila will take a liking to the couple's pretty daughter.
Reprints

Home From the Wars (Table of Contents: 3)

Genre
drama
Characters
Matthew Guilfoil; Jimmy Collins; John Forrest
Synopsis
Back from the Army, Congressional Medal of Honor recipient is offered a new job by his boss: to break the union that had been formed by employees after the war!
Reprints

Genre
adventure
Characters
The Boy Champions [Tuffy; Mickey; Wellington Smith]; Phoebe; Percy Clark (introduction); un-named thugs (villains)
Synopsis
The boys, after being denied the chance to give blood because they are too young, decide to try and get a Red Cross nurse's fiance to donate himself.
Reprints

First Line of Dialogue or Text
I'm a beaten man, Pop!
Genre
humor; sports
Characters
Mike McTigg; Pop; Sal
Synopsis
Pop figures that he can settle the problem between Mike and his girl, who think's the fighter is a roughneck.
Reprints