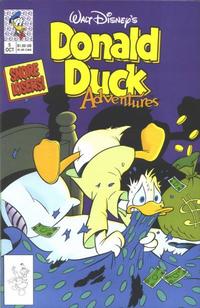 Job Number
KD 0890
First Line of Dialogue or Text
Yes, Donald, it's all for you! My gift of one million dollars!
Feature Logo

The Lottery Ticket (Table of Contents: 2)

Job Number
D 4876
First Line of Dialogue or Text
What is it, Doctor? Can you do anything for him?
Feature Logo

The Dancing Dog (Table of Contents: 3)

Donald's dog Bolivar is called "Bernie" in this story.