It's Bats, Man! (Table of Contents) 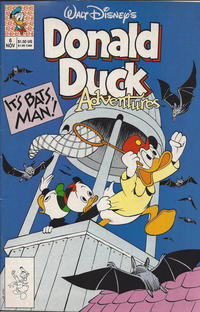 Lustig and Van Horn create a story in the mold of what has become known in fandom as "The Brittle Mastery of Donald Duck" - a sub-genre of stories by Carl Barks where Donald is an absolute master in some field of endeavor until he becomes overconfident, goes one step too far, and destroys his good reputation... along with many other things around him.

Lustig cleverly slips the names of some competitor's characters into his script - "Bat(s)man" (in the title), the Tasmanian Devil (small "d") and Titano the (not quite "super") ape. "Roger Lotsagall" appears to be a parody/tribute character of artist Marc Chagall.

Story has a modified version of the "William Van Horn Donald Duck Logo", where the words "Donald" and "Duck" are on a single tier.

The Mycologist (Table of Contents: 2)

Job Number
D 8164
First Line of Dialogue or Text
Wow! I can tell from the heft of this picnic basket that I'm gonna come back from this outing one stuffed duck!
Feature Logo

Style Points: A mushroom takes the place of the "t" at the end of the title "The Mycologist".

No writer or lettering credits.