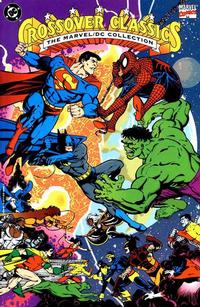 Inside front and inside back cover.

First Line of Dialogue or Text
Do we let the 'Dupers' -- whoever they are -- get away with what they've done --
Genre
superhero
Characters
Superman; Spider-Man

Partial panel image from the Superman and the Amazing Spider-Man story "The Battle of the Century!".

Introductions to the collected edition.

[Superman vs. The Amazing Spider-Man #nn] (Table of Contents: 6)

For information on the cover credits, see the index of the original issue.

How This Famous Cover Was Born (Table of Contents: 7)

Synopsis
Gerry remembers the genesis of the project.

The Battle of the Century! (Table of Contents: 9)

Adams, Romita, Austin, Rubinstein, and Wiacek are not credited in either the original or this reprint. For more information, see the index of the original printing.

Enlarged partial image of Superman from panel in following story.

Synopsis
Marv remembers the genesis of the project.

The Heroes and the Holocaust (Table of Contents: 15)

The origins of Spider-Man and Superman, each on half of the page.

Enlarged partial image from splash page in the following story.

Synopsis
Len remembers the genesis of the project.

The Monster and the Madman (Table of Contents: 21)

Half page origins of Batman and the Incredible Hulk.

Enlarged partial image of Batman from panel in previous story.

[Marvel and DC Present Featuring The Uncanny X-Men and The New Teen Titans #1] (Table of Contents: 24)

Synopsis
Chris remembers the genesis of the project.

First Line of Dialogue or Text
And now a word (or two) from Kitty Pryde...
Genre
superhero
Characters
Kitty Pryde

Enlarged partial image of Spider-Man from "The Battle of the Century!" story.

Genre
biography
Synopsis
Bios of all the creators involved.