The long pointed chin and nose in sideview are identical to the other credited Battefield stories and covers, so most probably him. 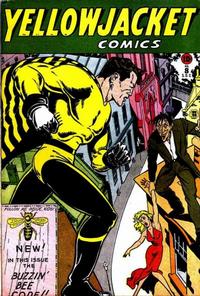 The Adventure of the Mad Architect (Table of Contents: 1)

The Moonstruck Madmen (Table of Contents: 2)

Genre
adventure
Characters
Diana the Huntress; Hercules; Jupiter; Mercury; Discordia; George Risti (merchant); VILLAINS: Count Vesti; Anton (inn-owner)
Synopsis
Diana is sent to a village in Balkania where people are affected with moon fever. She will destroy the evil leader and protect the others.

Crime in the Crystal Ball (Table of Contents: 3)

Genre
adventure
Characters
Danny King; Russo (circus manager); Sancho; Rudolpho (villain)
Synopsis
Old Sancho predicts disaster at the circus and later his own death in the crystal ball, but another man is behind it.

This is by DeLay, who recognized by the "slow" movement of the rather short figures. Also faces and the layout style more like old book illustrations. Originally credited to William M. Allison. Allison has more wide open eyes, like in his Poe story in #1.

The Third Wish (Table of Contents: 5)

First Line of Dialogue or Text
Teacher said she wanted to have a spelling bee...
Genre
humor

Crown for a Hero (Table of Contents: 7)

First Line of Dialogue or Text
River pirates are not uncommon on the inland waterways of China...
Genre
adventure

First Line of Dialogue or Text
You can't beat a circus for laughs...
Genre
adventure; war
Characters
Juan Martinez [Filipino Kid]; Kenoshi; General Zusaki
Synopsis
At the birthday party of Japanese General Zusaki, the Kid and his friend put on a surprise show to make the general loose face.