First Line of Dialogue or Text
They're not so tough.
Genre
superhero; humour
Characters
Herbie Popnecker [as the Fat Fury]
Synopsis
The Fat Fury, walking on air, hold Spiderman's and Batman's costumes as they run away in their underwear. 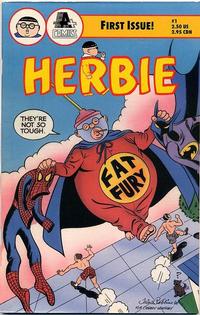 Publisher Roger Broughton welcomes the readers to publisher A+ Comics first new issues. He explains that since buying Charlton and American Comic Group (ACG), they've been preparing the release of "great material at a great price."

Herbie and the Spirits! (Table of Contents: 2)

Genre
humour; superhero
Characters
Herbie Popnecker; Mrs. Popnecker; Pincus Popnecker
Synopsis
Herbie is the new kid in school. He proves his bravery by going to a haunted house. Supernatural beings (a witch, a ghost, a creep, and Frankenstein) cause havoc, but prove to be no match for Herbie, his lollipops, or his magic.
Reprints

Herbie looks and talks differently in this pre-Herbie reprint.

Make Way for the Fat Fury! (Table of Contents: 3)

Genre
humour; superhero
Characters
Herbie Popnecker; Pincus Popnecker; Mrs. Popnecker
Synopsis
The giant Mr. Horrible is a one-man crime wave, leaving Senator Goldwater and President Johnson at wits end. To help out, Herbie enrolls in a superhero school to become a licensed costume hero. Herbie did not graduate, and when his father threatened to become a costume hero, Herbie created the Fat Fury. Not a licensed, graduate hero, but he'd do. He wore red flannel underwear, a blue cape, a blue mask and a plunger on his head. The Fat Fury rescues the Statue of Liberty and defeats Mr. Horrible.
Reprints

Who knows what mush lurks in the minds of animals...DA Shadono