Herbie Wants You! (Table of Contents)

Genre
humour; superhero
Characters
Herbie
Synopsis
Herbie, dressed as Uncle Sam, points at the reader with one hand and holds a patriotic lollipop in the other. 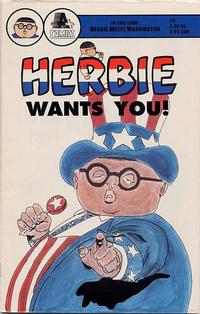 Genre
humour; superhero
Characters
Herbie Popnecker; Pincus Popnecker; Mrs. Popnecker
Synopsis
Herbie's father thinks his son will never amount to anything or do anything. Herbie goes to the zoo where he takes on a tiger. Then, he saves Senator Stevens who is lost at sea. Finally, he stops an alien invasion.
Reprints

This story is the first appearance of Herbie and features his peculiar way of flying and his ability to talk to animals and aliens. Herbie looks and talks differently in this pre-Herbie reprint.

Popnecker the Pilgrim! (Table of Contents: 3)

The Hard Day of Murgatroyd Minch! (Table of Contents: 8)

The Space Broomstick (Table of Contents: 9)

Genre
fantasy-supernatural
Synopsis
No one can explain the strange abilities of Archie Worple's broomstick.
Reprints