On sale date from the publication date found in the Catalog of Copyright Entries, Part 2, Periodicals, New Series, Volume 34, 1939, Number 3. Class B periodical. Copyright number B 422127. Volume number not listed in the original comic indicia. 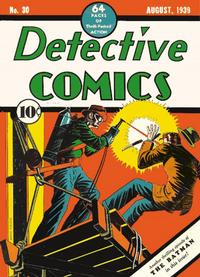 [The Return of Doctor Death] (Table of Contents: 2)

First Line of Dialogue or Text
Less than a week ago...
Genre
superhero
Characters
The Batman [Bruce Wayne]; Mrs. Jones; Mrs. Jones's maid; Doctor Death [as Ivan Herd] (villain); Mikhail (villain, Dr. Death's assistant, death)
Synopsis
Thought dead in a fire in his home, Dr. Death has survived, but is in need of funds to re-establish himself, so he sets his sights on diamonds owned by a Mrs. Jones.
Reprints
Keywords
gas capsules; utility belt

The storyline continued from the previous issue.

The original script for this story has survived, confirming Fox's authorship. The original title of the story was "The Batman and the Diamonds of Death". Batman logo is The Batman.

Finger of Doom (Table of Contents: 6)

[The Dictator of the United States] (Table of Contents: 7)

Bailey signs his initials on the final page.

First Line of Dialogue or Text
Yes sir - What can I do for you?
Genre
detective-mystery
Characters
Larry Steele

The Crossbow Mystery (Table of Contents: 11)

The Tea Racketeers (Table of Contents: 12)

Script previously credited to Hickey, but there is no evidence to suggest he did anything other than the art.

Script previously suggested as by Elvin, but there is no evidence that he did more than art and letters.

The Comic Book of Tomorrow Is Here Today!! (Table of Contents: 15) (Expand) /