On-sale date from Amazing Heroes #191.
This issue has variants: 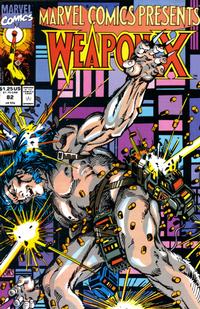 Genre
superhero
Characters
Logan [Wolverine]; The Professor; Dr. Cornelius; Hines
Synopsis
Logan breaks into the adamantium vault and kills Cornelius. The Professor uses Hines as bait to lure Logan into a trap that will spell his fiery death.
Reprints

Life During War Time Part 1: The Price of Freedom (Table of Contents: 2)

Sometimes this is listed as an eight part story, others as a six part story. Is really six-parter.

Hero in Hiding (Table of Contents: 4)

This story seem to set the pace for Luke Cage's return in the book "Cage."