The Doll Man, Mighty Mite of Action, in 3 Big Stories! (Table of Contents) 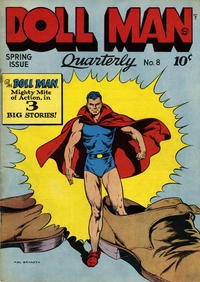 The Corpse of the Doll Man (Table of Contents: 1)

Al Bryant has shorter figures with more rounded faces than this. It look more like Zolnerowich's figures with long torso and special way of walking and running. The inking looks more like Fuji with the narrower female faces with gaping mouth than Bryant, page 4 and 5. The grinning faces of the villains with marked smiling cheeks look like Fuji too. Uncertain credits.

The Man With the Terrible Eyes (Table of Contents: 2)

Originally credited to Al Bryant, but the pencil work is by Zolne with his very peculiar drawling way of walking, page 2 and 3. Like in many of his Black X stories. He is credited on both pencils and ink, but inking is a bit different from his signed stories using much more thin penlines.

Genre
humor
Characters
Torchy Todd (first appearance); Mayor
Synopsis
Torchy sockes the face of the Mayor's son and gets in the papers and a new job as secretary.
Keywords
adult

The Eyes of Eric (Table of Contents: 5)

Genre
adventure
Characters
Eric Logan; Kwong (philosopher)
Synopsis
Eric was an adventurer among the islands of the South Seas.

[The Will of Enos Gotch] (Table of Contents: 7)

Originally credited "Bill Ward?". Page 2 and 8 has a figure leaning forward from the hips and with stretched neck like Zolne. The butler entering the room on page 5 moves his legs in a shuffling way, and the bent knees of Darrel on page 12 are all signs of Zolne. He is credited on both pencils and ink, but inking a bit different from his signed story in Fight Comics #15.