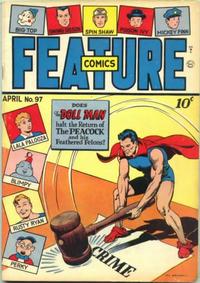 The Feathered Felons (Table of Contents: 1)

Genre
superhero
Characters
Doll Man [Darrel Dane]; Martha Roberts; Professor Roberts; The Peacock (villain)
Synopsis
The Peacock is in prison and suucceeds in building a model plane, which he uses to escape, then he gains control of a flock of pigeons to help him in committing more crimes.

Originally credited "Al Bryant?", but tilting figures with a long upper body and awkward way of standing and walking, some wild eyes, and also broad shoulders and narrow head on stretched neck are all pointing to Zolnerowich. He is credited on both pencils and ink on this feature by Jerry Bails' Who's Who, but inking may vary.

First Line of Dialogue or Text
It's positively unsanitary the way Lala leaves money around in jars to collect dust!
Genre
humor
Characters
Vincent Palooza; Lala Palooza
Synopsis
Vincent steals money from Lala and hides it in the cuckoo clock.

First Line of Dialogue or Text
Boy! Did I rent a costume!
Genre
humor
Characters
Vincent Palooza
Synopsis
Vincent tries on his gorilla costume, forgets he's wearing it, and greets the census taker at the door.

[The Band Breakup] (Table of Contents: 7)

Tomsey is credited on this feature by Jerry Bails' Who's Who, and some faces in sideview have similarities with his signed Jackie Law stories in Clue Comics, and also his Kid Click in US Camera Comics, so could be by him. The inking has some resemblence to the many Manhunter and Jester stories in Police Comics, by unknown.

So similar art to the previous in this feature that it could be Quackenbush, even with some figures with longer legs than usual. He is credited on pencils and ink on this feature by Jerry Bails' Who's Who. Uncertain inking when compared with his signed stories.

First Line of Dialogue or Text
Hey! I ain't played a joke on the boss in a long while!
Genre
humor
Characters
Butch; Boss Jeff Bangs
Synopsis
Butch pretends to have amnesia. Boss Bangs says Butch is the circus handyman and forces him to do chores.

First Line of Dialogue or Text
Butch, old chap...you've been with this show thirty-six years today...
Genre
humor
Characters
Butch; Boss Jeff Bangs
Synopsis
When Boss Bangs gives a photo of himself to Butch as a gift, Butch is outraged. He tears up the photo, only to later learn his new contract--with a raise of $100 per week--was on the back.

The Isle of the Dead (Table of Contents: 14)

Some pointed faces with eyes far apart make this a Peter Riss story, page 4, 5 and 6, and also a flying knock-out on page 6. Same inker as in many Manhunter and Jester stories, but unknown. Riss is credited with pencils only on this feature by Jerry Bails' Who's Who.