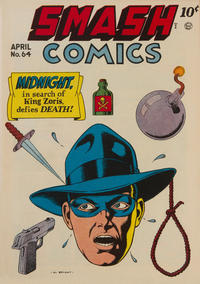 First Line of Dialogue or Text
Trouble is, all the brides...
Genre
humor; children
Characters
Archie O'Toole (king)
Synopsis
The people clamor that the king picks himself a queen.

First Line of Dialogue or Text
You see, Marge? Baseball is very simple! Three strikes and he's out!
Genre
humor; teen
Characters
Spunky; Curly; Marge; Pug
Synopsis
Spunky and Curly, who have distinguished themselves at school, gets awards, a cup and a toothbrush.

[The Wheel of Fortune] (Table of Contents: 5)

Possibly Quackenbush, with the many figures with short torso and also some short arms and fingers. Quackenbush has some signed stories in this feature and some in Military Comics from the same period, but not very similar to each other.

First Line of Dialogue or Text
Fight night... the crowd roared "Murder the bum"... and Rookie Rakin knew for once that the fans' mocking advice had a literal significance!
Genre
detective-mystery
Characters
Rookie Rankin; Kayo Marvin; Spades Quinn; Roddy Dirk
Synopsis
A boxer is ordered to take a dive or be killed.

The Volcano Men (Table of Contents: 8)

Statement of the Ownership, Management, Circulation, etc. (Table of Contents: 9)

[The Vitality Tonic] (Table of Contents: 11)

Genre
superhero
Characters
The Jester [Chuck Lane]; John Carey; Joan Carey; Dr. Brook (villain)
Synopsis
A doctor is committing a sane man to an asylum to get his fortune.
Reprints

Originally credited "Sam Citron?" This is similar art to the many Manhunter stories in Police Comics credited to Peter Riss on pencils. Notice the flying man getting a punch on the jaw, which can also be found in at least 12 Manhunter stories.