On sale date from Mike's Amazing World site.
This issue has variants: 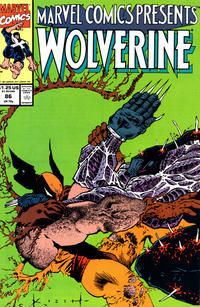 First Line of Dialogue or Text
I always knew if I stayed in Madripoor long enough, I'd end up climbing up the walls.
Genre
superhero
Characters
Wolverine; Cyber; Tyger Tiger; Generaly Coy
Synopsis
Wolverine battles his old enemy Cyber and gets his guts handed to him.
Reprints

First Line of Dialogue or Text
In those last hours, I started to figure it all out. I really hadn't had any time to think before that.
Genre
superhero
Characters
Firestar; Cross; Fitch; Arms of Salvation; Freedom Force [Mystique; Avalanche; Blob; Pyro; Spiral]
Synopsis
As Firestar's father recives a lung transplant, Freedom Force breaks into the Arms of Salvation complex to rescue Mystique.

In the story has erroneously Part 6 but in the table of contents and in the sequence is part 5.

Take Me Out to the Bomb Game (Table of Contents: 4)

First Line of Dialogue or Text
As his past catches up to him... Beast battles the Constrictor
Genre
superhero
Characters
Firestar; Beast; Paladin