[Dive of Death] (Table of Contents)

Story title taken from actual story upon which the cover is based. 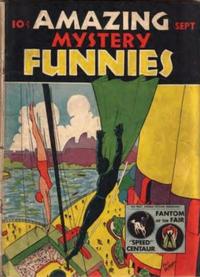 Partially illustrated page, first featuring an article by the Editor, Uncle Joe, on Colonial American homes. Secondly, there is a publisher's plug for the latest mags published by Centaur. Thirdly, there are three very brief advertisements concerning postage stamps, a quiz booklet and film developing. Finally, at the bottom of the page, is an illustrated promo for Keen Detective Comics and Amazing Mystery Funnies with illos of Speed Centaur and the Masked Marvel.

Genre
superhero
Characters
Fantom of the Fair; Mr. Adams (Fair show owner); Jane Adams (Adam's daughter); Tony (Adam's employee); Marcos (villain, Fair show owner, death); Marcos' henchman (villain, death)
Synopsis
A struggling Fair show owner has words and more with a fellow competitor who seems to be stealing every idea that he has had. The rival goes so far as to rig a death dive trap for the girl, and might have succeeded if not for the intervention of the Fantom.
Reprints
Keywords
Golden Palace; World's Fair

First Line of Dialogue or Text
Get Professor Gray on the televisor!
Genre
science fiction
Characters
Captain Tim; Professor Gray; Dr. Ralon (death); Nelson (Ralon's assistant); un-named girl (villain, Ralon's first created human, death); girl's men (villains, all die)
Synopsis
Dr. Ralon confirms to Professor Gray that he has succeeded in bringing to life, through his evolutionizing machine, human beings from animals, when a girl and some men enter his lab and kill him. Tom and Gray soon learn that the girl was the first of Dr. Ralon's creations and that she had gone mad, killing the doctor.
Keywords
acetylene gun; Air-Sub 'DX'; electronic pistol; Lanton City

Don Dixon and the Hidden Empire Part 2 (Table of Contents: 5)

Pfeufer signed his name in the 2nd panel on page one and panel 5 on page four.

First Line of Dialogue or Text
We find 'Speed Centaur' waiting in a cave...
Genre
superhero
Characters
Speed Centaur; Reel McCoy; Jack Pott gang [Jack Pott (leader); Jim "Droopy" Raws; rest un-named] (villains)
Synopsis
To try and catch up with the Jack Pott gang, Speed assumes the disguise of a true horse and he and Reel follow one of the gang's torpedo's into town. Speed then uses his voice to convince the thug that he is a talking horse, and the thug buys the horse from Reel and takes it and Reel to the gang's hideout.
Keywords
Nob Nose Mountain

First Line of Dialogue or Text
Hmmm -- looks like all the foreign countries...
Genre
adventure
Characters
Barry Finn; Joan Hart; Professor Walton (scientist, death); Sulla (villain, Zaroff's assistant); Dr. Zaroff (villain); Dacia Zaroff (villain, Zaroff's daughter); Joseph Stalin (villain, cameo); Adolf Hitler (villain, cameo); Benito Mussolini (villain, cameo)
Synopsis
Zaroff visits an English scientist who has invented a process for enlarging any insect to any size that he wishes. Seizing upon the opportunity, Zaroff kills the scientist, seizes the machine for his own purposes, and meets with leaders from the major warring powers, offering (for a price) the use of this invention. Then, accompanied by Dacia, Zaroff sails to New York, planning to release a horde of the giant insects upon the United States, bringing disease, plague and death.

Knuckle Down! (Table of Contents: 9)

Genre
detective-mystery; sports
Characters
Pat Mullen (a baseball pitcher); Mr. Mullen (Pat's father); Mrs. Mullen (Pat's mother, cameo); Champ (villain, a boxer); Champ's manager (villain)
Synopsis
Concerned because his name and bout is being pushed out the sports section of the newspaper by the Union school, Champ and his manager conspire to get the team's star pitcher to throw the game in the Junior Baseball Championships.
Keywords
Daily News