Indicia title is The Mighty Thor.

4 inner pages are printed on heavier paper.
This issue has variants: 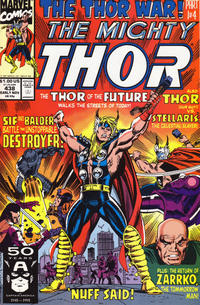 The Hel-Hounds and the Heroes (Table of Contents: 2)

Tales of Asgard Home of the Mighty Norse Gods!
Genre
fantasy-supernatural
Characters
the Destroyer; Sif; Balder; Garm; Hela (flashback)
Synopsis
Sif and Balder escape from the Destroyer and learn what the Destroyer did to Hela.
Reprints

Includes letters from Michael Stroeh, PFC Anita Schlosser, Joe Christiano, Bob Vinson, Michael Leon and Jeff Mara. Letters by Stroeh, Schlosser, and Christiano, along with their editorial responses, are reprinted in the following issue. Letters by Vinson and Leon, printed here without editorial response, are reprinted with responses in the following issue.