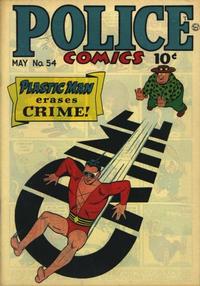 The Thinking Machine (Table of Contents: 1)

First Line of Dialogue or Text
Oh, Paw! ... A lettuh fum Dewey!
Genre
humor; military
Characters
Dewey Drip; Ma Drip; Pappy Drip; General
Synopsis
Stationed in India, Dewey serves his general a cup of tea made with leaves his mother had sent him. The "tea" turns out to be catnip and it attracts tigers.

[The Clothing Robberies] (Table of Contents: 4)

First Line of Dialogue or Text
Snf! Snf! What's that, Hustace...a new soft drink?
Genre
superhero
Characters
The Human Bomb [Roy Lincoln]; Hustace Throckmorton; Honeybun
Synopsis
Hustace, now an inventor, creates a perfume that makes men crazy for Honeybun, which is good in itself, because Hustace is now interested in another woman.