On sale date from the publication date and volume number found at the Catalog of Copyright Entries, Part 2, Periodicals, New Series, Volume 34, 1939, Number 3. Class B periodical. Copyright number B 424435. 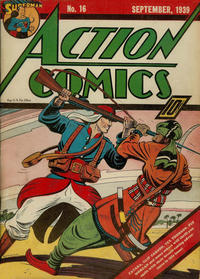 [Superman and the Numbers Racket] (Table of Contents: 2)

Genre
superhero
Characters
Superman [Clark Kent]; George Taylor (unnamed); Police Commissioner Watson; Marty Kaye (Villain); Butch (Villain); Nick (Villain); Pete (Villain); Jack O'Leary
Synopsis
After a run-in with a gambler who is opting out for suicide, and a Police Commissioner who won't deal with the city's gambling problem, Superman decides to wage a one-man war himself against gambling and aid the victims of it.
Reprints

The last panel of the story is an illustrated plug for New York World's Fair Comics for 1939. Note and synopsis added by Craig Delich.

The Terror from Saturn (Table of Contents: 12)

First time since Action Comics #1-3 in which Zatara speaks backwards to invoke his magic.

[For Countless Centuries Men Have Lived in These Strange Rock Cones!] (Table of Contents: 13)