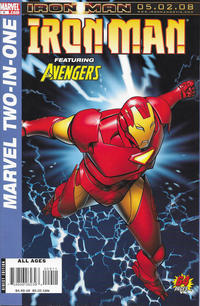 Heart of Steel (Table of Contents: 2)

Retelling of the origin of Iron Man. In this version, A.I.M. is substituted for the Communist Vietnamese, and two suits of armor are created, one for Tony and one for Professor Yinsen.

A Not-So-Beautiful Mind (Table of Contents: 5)

Although spelled "Modok" in the real Marvel Universe, the spelling given for the villain in the character field for this index is correct for this issue.