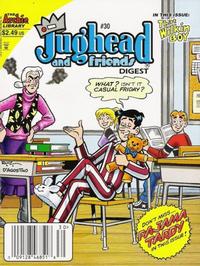 The Workout (Table of Contents: 2)

Off the Cuff, or, Cut Me Some Slacks! (Table of Contents: 3)

All Wet (Table of Contents: 4)

Genre
humor; teen
Characters
Jughead Jones; Clabberhead; Sarah; Emma; George
Synopsis
Jughead's newsman uncle helps unravel the mystery of why Sarah and her sister call Jughead Sam, and insist that they're in love with him. Emma had used Jughead's photo and concocted a spectacular guy to make her boyfriend jealous; Sarah had fallen for the imaginary guy her sister described. Jughead helps get George and Emma back together.
Reprints
Keywords
Newspaper; Ontario; Toronto

The Sleeper (Table of Contents: 12)

Genre
teen
Characters
Jughead Jones
Synopsis
Even in his dreams, Jughead isn't much of a sportsman.
Reprints

This story has no dialogue and is told completely in pantomime.

Credits from the reprint in Jughead and Archie Double Digest (Archie, 2014 series) #19.