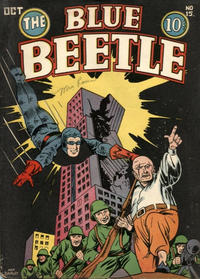 First Line of Dialogue or Text
It's the chief of police over at Fairlawn, wonder what he wants?
Genre
superhero
Characters
Blue Beetle [Dan Garret]; Sparky [Sparkington J. Northrup]; Madame Fang (villain, introduction); Rod Rutter; Mike Mannigan; Joan Mason
Synopsis
Dan and Mike have to go to a neighboring town to extradite Rod Rutter. Sparky hitches a ride. Madame Fang runs them off the road and rescues Rod. Joan comes along and picks up Dan and Sparky and gives chase. Joan gets captured, so the Beetle and Sparky have to go into action.

Sparky appeared on the cover of issue #14 and in an ad page in that same issue, but this is his first story appearance. Although the second story in this issues is chronologically the first. Joan Mason is blonde again.

First Line of Dialogue or Text
Nosey Nolan was teased so much about his big nose...
Characters
Nosey Nolan (intro, only appearance)

First Line of Dialogue or Text
The mid-afternoon silence is broken by the eerie whail [sic] of a screaming siren...!
Genre
superhero
Characters
Blue Beetle [Dan Garret]; Hautmann (villain; introduction); Mike Mannigan; Sparky [Sparkingon J. Northrup] (introduction, origin)
Synopsis
The Beetle has to deal with a prison break. Hauptman a Gestapo agent gets to them. Meanwhile Lord Northrup ships his son to America for the duration. Hauptman tries to kidnap the boy when he lands. The Beetle rescues him, but Sparky discovers his identity and asks to be his partner.

First Line of Dialogue or Text
Paris--the heavy tread of Nazi boots echoes through a street of the occupied capital!
Genre
superhero
Characters
V-Man
Synopsis
V-Man saves the occupied town of Ste. Gabriel from being wiped out to teach the Resistance a lesson.

The Mixed-Up Parrots (Table of Contents: 6)

The Bloodless Bodies (Table of Contents: 7)

Genre
superhero
Characters
Blue Beetle [Dan Garret]; Sparky; the Vampire [Dr. Grime] (villain, introduction); Mike Mannigan
Synopsis
Dan, Mike and Sparky investigate a killer who leaves his bodies dry of blood. It's Dr. Grime pretending to be a vampire so he can get enough blood to resurrect corpses from Ancient Egypt.