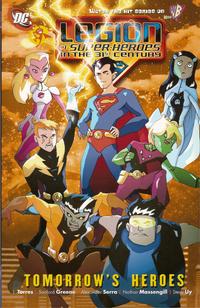 Legion of Super-Heroes in the 31st Century: Tomorrow's Heroes (Table of Contents: 1)

Publication data page. Illustration taken from a panel from the story from Legion of Super-Heroes in the 31st Century (DC, 2007 series) #7.

The Powers That Were (Table of Contents: 5)

Genre
superhero
Characters
Legion of Super-Heroes [Bouncing Boy; Lightning Lad; Saturn Girl; Timber Wolf; Superman; Brainiac 5; Phantom Girl]; Infectious Lass; Invulnera-Boy; Porcupine Pete; Double-Header; Night Girl; Polar Boy; Color Kid; Stone Boy; Chlorophyll Kid; [unidentified blonde female applicant]; Gyr of Khundia
Synopsis
At Legion tryouts, Infectious Lass infects the Legion with a virus that swaps the Legionnaires' powers and some of their physical attributes with one another, just as a Khundian advance force attacks. When the Legion surrenders, the Khundians apply restraints designed for each of them, but since the Legionnaires have had their powers scrambled, they are able to escape. Infectious Lass strikes the Khundians with stomach flu and they retreat. The Legion offers Infectious Lass membership, but she declines in order to sharpen her abilities and offers to serve as a substitute Legionnaire if needed.
Reprints

Genre
superhero
Characters
Legion of Super-Heroes [Superman; Lightning Lad; Phantom Girl; Timber Wolf; Saturn Girl; Brainiac 5; Triplicate Girl; Bouncing Boy]; Emerald Empress
Synopsis
When Superman beats his vertical maze record, Lightning Lad challenges Superman to a series of contests. After losing each contest, Lightning Lad flies off in anger and falls under the control of Emerald Empress. Superman finds Lightning Lad and they fight to a draw until the rest of the Legion arrives and the Empress disappears.
Reprints

Attack of the Green Lantern Corps (Table of Contents: 8)

Several of the 31st century Green Lanterns look to be from the same species as many of the Green Lanterns of the 21st century, including one each from Bolovax Vik, Medphyll, Slyggia, and Xudar.

No Boys Allowed! (Table of Contents: 9)

Genre
superhero
Characters
Legion of Super-Heroes [Phantom Girl; Triplicate Girl; Saturn Girl; Lightning Lad; Superman; Bouncing Boy]; Circe; Princess Xenobia; Wonder Woman (statue)
Synopsis
The Legionnaires travel to New Themyscira, the home of the Amazons on Io, the fourth largest moon of Jupiter, with Phantom Girl, to visit her friend Princess Xenobia. But there, they uncover a plot by Circe to remove the princess. Circe makes the girls turn on each other, and turns the boys into pigs. But working together, the Legionnaires and Xenobia defeat Circe.
Reprints