The Most Impulsive Kid in the 31st Century! (Table of Contents) 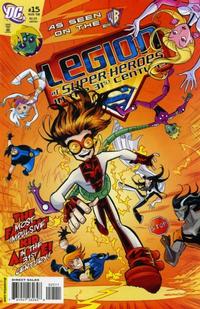 Genre
superhero
Characters
Legion of Sper-Heroes [Bouncing Boy; Triplicate Girl; Brainiac 5]; Bart [Impulse]; Tharok
Synopsis
While playing virtual reality games, Bouncing Boy and Triplicate Girl suddenly find themselves in a virtual Keystone City of the 21st century, where a boy named Bart is being trained to control his special abilities. Bart thinks the Legionnaires are reponsible for the disappearance of elements of his virtual world, but Brainiac 5 helps them track down the real culprit and restore Bart's world.

Bart is never called Impulse in this story. In the virtual Keystone City, a street corner is marked Waid & Wieringo, a reference to Impulse creators Mark Waid and Mike Wieringo.

Listing of other Johnny DC books for sale the same month as this book.