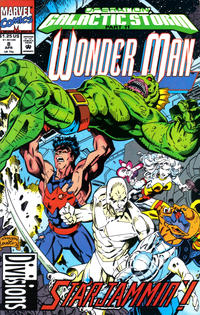 First Line of Dialogue or Text
On a lifeless planet in the Shi'ar homeworld solar system which serves as a weapons testing facility...
Genre
superhero
Characters
Wonder Man; GUESTS: Lilandra; Shi'ar; Avengers [Thor; Scarlet Witch; Vision; Captain Marvel [Monica Rambeau]; Starfox]; Starjammers [Corsair; Hepzibah; Raza; Ch'od]
Synopsis
Lilandra asks the Starjammers to transport her gigantic Nega-Portal to the Kree Empire. Corsair refuses and storms off, but the rest of the Jammers agree. Realizing that the portal is really a huge Nega-Bomb, Wonder Man and Vision hitch a ride and try to stop the Starjammers. After a brief scuffle, Wonder Man convinces the Jammers what exactly they are transporting, and they jettison the bomb but are too slow to stop their forward progress as they disappear through a stargate. Wonder Man and Vision are stuck adrift and alone on the Nega-Bomb.
Reprints