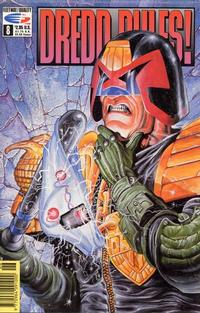 The Amazing Ant-Man (Table of Contents: 2)

The man who controls the giant ants is named Henry Pymm.

An adulterous love triangle involving the three hosts of a kiddie show is accidentally revealed on-camera, with the principals acting out the resulting domestic dispute on a kids' level. My description doesn't do this one justice.

Curse of the Spider Man (Table of Contents: 4)

Genre
science fiction
Characters
Judge Dredd; Dr. J.J. Clamp; Dilip
Synopsis
Dilip is told he has contracted the spider virus, which will turn him into a spider. He tries to avoid the fate by committing suicide, but keeps failing.
Reprints
Keywords
suicide; virus

The obvious tie-in is with Jack Kirby and his Demon character, but it's only in the names, not the images. The building the Kirbys live in is named Matt Wagner.

Same picture as the cover, without any logo or text.