Front portion of the dust jacket. 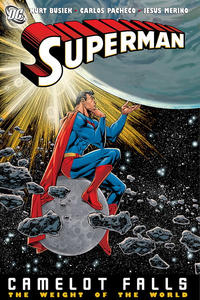 Embossed with the volume title.

The Weight of the World (Table of Contents: 4)

Genre
superhero
Characters
Subjekt-17; Toyman (future, cameo); Arion [of Atlantis] (flashback); Sirocco (intro in present day); Chris Kent (cameo); Young Gods (intro, cameo)
Synopsis
Subjekt-17 convalesces in Tibet. After listening to his friends debate the future that Arion showed, Superman enlists Zatanna's help to track down Arion, with no success. He does track down Sirocco, accidentally naming him in the process, and asks him about Khyber. Sirocco assures Superman that he destroyed Khyber a while ago. Back in Metropolis, a bunch of young New Gods appear.
Reprints

The book that Lois is reading to Chris on page 21 is an homage to the golden age Flash's three friends, who were frequently called "The Three Dimwits," and looked like that cover illo. And the authors listed on that book are an homage to that Flash's creative team, E. E. Hibbard and Gardner Fox.

The Big Picture (Table of Contents: 6)

Genre
superhero
Characters
Arion [Bill Knightly]; Arion [of Atlantis]; Dawn (cameo); Witchfire (cameo); Bork (cameo); Young Gods [including Esak; Zamma Girl; Azar; Otak; Fastbak; Varak]; Mordru (flashback, cameo); Baby Chemos (intro, cameo); Esperanza Luisa Sanchez (cameo)
Synopsis
Arion of Atlantis tracks down Bill Knightly, who has been pretending to be Arion. Arion learns from Knightly how he had died in the present age. Meanwhile, Superman finds Metropolis overrun by young New Gods. He rounds them up, as Lightray arrives. Lightray senses turmoil in Superman and urges him to take the night off. After talking with Lana and then Lois, Superman sits on the moon to think. On returning, he can't help but rescue a little girl. Lightray and most of the Young Gods leave, but two remain. Arion and Superman meet and Superman tells Arion that he won't quit, so Arion attacks him.
Reprints

Genre
superhero
Characters
Arion; Prankster's gang [Elisabeta; Saskia; Marjorie]; Ron Troupe (cameo); Squad K [including Colonel Perseus T. Hazard; Anders; Cage; Jones; Stenec; Asherman] (intro); Young Gods [including Turrek; Sarka]; Pranksterbot
Synopsis
Arion has attacked Superman and controls his mind to make him serve Arion. Superman attacks at the Daily Planet, but regains control by focusing on Jimmy's faith in him. But everyone believes that Superman is still mind controlled, and a federal force named Squad K attacks. After he escapes them, the Prankster hits him with a giant pie, and then the Justice League comes to stop him. Superman finally convinces them he's no longer mind controlled. Arion goes to hide to bide his time, until he kidnaps the Young God runaways. Superman discusses the event with Squad K and captures the Prankster.
Reprints

Tide and Torrent (Table of Contents: 10)

Genre
superhero
Characters
Arion [of Atlantis]; Subjekt-17; Dr. Sliney (cameo); Gerald (cameo); Arion [Bill Knightly]
Synopsis
Superman has been trying to track Arion, with the help of Zatanna and the Phantom Stranger. Arion keeps creating minor disasters as a warning, which Superman stops. Subjekt-17 tracks down Superman, and makes him choose between helping Subjekt-17, or standing for his torturers. Superman wants to do both, but Subjekt-17 treats that as a rejection of him, and attacks. Superman defeats him, and Subjekt-17 reveals where Arion is, but he teleports away. Superman goes to Arion, but instead of attacking directly as Arion had figured, he causes a whirlpool, and lets the ocean’s weight crush the city.
Reprints

Genre
superhero
Characters
Arion [of Atlantis]; Arion [Bill Knightly]; Young Gods [Turrek; Sarka]; Lana Lang; Bette (cameo); Squad K [including Colonel Perseus T. Hazard]; Chris Kent [Lor-Zod] (cameo); Khyber; Ghostwolves (future)
Synopsis
Superman talks to the Phantom Stranger about the future, and is given a gift to help in the coming battle. Superman battles Arion, who is using the kidnapped Young Gods as part of his transformed army. Using Phantom Stranger's gift of a shield against magical attacks, he strips Arion of his amulets and defeats him. Arion flees back in time, leaving the other Arion behind disguised as himself. Lana's use of the Scancams helps Lexcorp's financial problems. Khyber comes back to life after being defeated by Sirocco two years ago.
Reprints