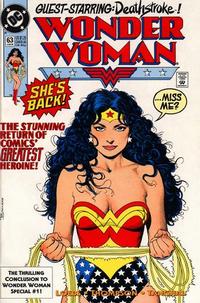 Wonder Woman is able to use Proteus' gift of illusion to give herself the appearance of a concussion.

Although the ceremony to transform Barbara Minerva into the Cheetah has been shown to be complicated in the past (in Wonder Woman (DC, 1987 series) #9), Barbara makes the transition here instantaneously by simply drinking a drop of blood.

Wonder Woman returns to America empty-handed... or does she? (Table of Contents: 2)

Synopsis
In newspaper format, a reiteration of Wonder Woman's origin and mission; a fond adieu from her former editor; and a humorous article about her newest editor.

It is noted that Wonder Woman first arrived in Boston "about two years ago," and that Princess Diana was 20 years old when she left Themyscira.