On sale date from the publication date and volume number found in the Catalog of Copyright Entries, Part 2, Periodicals, New Series, Volume 34, 1939, Number 3. Class B periodical. Copyright number B 424389. Volume number not listed in the indicia of this comic. 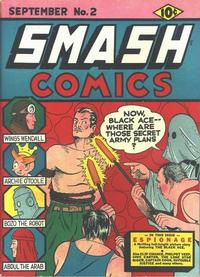 Case of the Missing Walrus (Table of Contents: 5)

[The First Trial] (Table of Contents: 7)

Genre
science fiction
Characters
Hugh Hazzard; Bozo the Robot; Commissioner Hunt; Alvin Hinton; Gyp Catrone (villain)
Synopsis
While Hazzard wastes no time in adding a flying device to the robot, Commissioner Hunt is very displeased that this robot was on the loose after ordering it destroyed. Hunt is in the process of ordering Hazzard to turn the robot over to him when a news flash concerning a kidnapping interrupts the demand. Hazzard sees a chance to prove Bozo's worth, and uses the robot to capture the kidnapper's plane, thus proving the value of the robot in crime fighting, especially since Hunt liked the idea that he could use Hazzard's services at no expense to taxpayers.
Reprints

[The Origin of the Invisible Hood] (Table of Contents: 10)

Genre
superhero
Characters
Invisible Hood [Kent Thurston]; Professor Hans Van Dorn (scientist, death); Garrick Spade (villain); Spade Gang (villains)
Synopsis
The Spade Gang captures a scientist who has discovered the secret of invisiblity by the use of a new phosphorescent chemical. The scientist is killed, but not before bestowing his secret on Kent Thurston, who now becomes known as the Invisible Hood.
Reprints

With this issue, the feature is now titled "Invisible Justice", but the hero himself was still, and always would be, called the "Invisible Hood".

Mystery at Catalina (Table of Contents: 12)