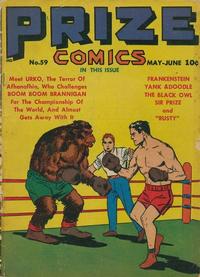 Genre
sports
Characters
Boom Boom Brannigan (Champion boxer); Character (Brannigan's manager); Pinky [aka Urko; aka Jujuboo] (a white gorilla); Gorilla's female owner; "Lefty" Wright (a boxer); "Mauler" Miller (a boxer); pet shop racketeers [Slim; Stinky] (villains)
Synopsis
Boom Boom gets involved with a pet shop racket in which people bring in their valuable pets for grooming, but the owners sell them and later tell the customers that their pets had incurable diseases and had to be put down. But when a lady brings in her young pet gorilla, the owners decide to shave all his hair off and put him in the ring as a boxer. Boom Boom, already on the case of the missing gorilla, as boxing Champion, must face Urko, who makes short work of the champ. But Brannigan realizes Urko is the gorilla and rounds up the racketeers, and Urko becomes the star of the local zoo!
Keywords
Evening Star News

Voight drew this story just about a year before he passed away.

The End of the Rope (Table of Contents: 3)

First Line of Dialogue or Text
They would cut in!

The Man Who Lived Alone (Table of Contents: 6)

Art is consistent with Kane’s Wildcat art signed under “Gil Stack” from Sensation Comics #70-72 (1947), including his tall and burly characters with lanky arms and the antihelix of the ear drawn as a crescent shape. Previous indexer suggested Jerry Robinson.