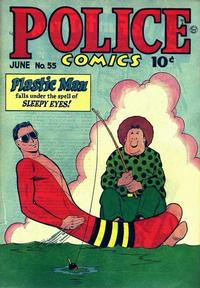 First Line of Dialogue or Text
A glimpse of the two great minds of the Lincoln-Throckmorton Laboratories, Inc. ...
Genre
superhero
Characters
The Human Bomb [Roy Lincoln]

First Line of Dialogue or Text
Oh, happy day! On the way home at last!
Genre
humor; military
Characters
Dewey Drip; Ma Drip; Pappy Drip
Synopsis
Dewey has enough "points" to be discharged from the army. Pappy sits on a porcupine and gets "points" of his own.

"Soldiers were given one point for each month of military service and one additional point was given for each month of overseas service. Each battle star or decoration earned a soldier 5 points. Soldiers were awarded 12 points per dependent child up to a maximum of three children. A total of 85 points was needed for eligibility. Soldiers who had earned that number of points were to be demobilized as soon as transport back to the United States was available."
https://en.wikipedia.org/wiki/Demobilization_of_United_States_armed_forces…

The Masked Pirate (Table of Contents: 7)

Next appearance in BLACKHAWK #13.

[The Last Gang in Rotten Row] (Table of Contents: 9)