Painted-cover editions exist with HRN 167. There are at least two variants as to inside front cover promos.
This issue has variants:

The Scottish Chiefs (Table of Contents) 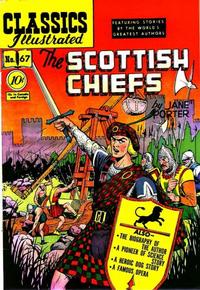 The Scottish Chiefs (Table of Contents: 1)

An adaptation of the Scottish Chiefs novel, first published in 1810.

Genre
historical
Synopsis
A recounting of the Othello opera by Giuseppe Verdi adapted from the William Shakespeare play.