Information for this index from Saltarella. Appears with the second cover in an HRN 158 version.
This issue has variants:

Men Against the Sea (Table of Contents) 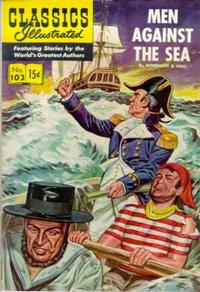 Build Your Own Library (Table of Contents: 1) (Expand) /

Men Against the Sea (Table of Contents: 2)

First Line of Dialogue or Text
On the morning of April 28, 1789, the crew of His Majesty's Armed Transport, "Bounty", mutinied against the tyrannical rule of the captain, Lieutenant William Bligh.
Reprints

First Line of Dialogue or Text
During World War I, charles Nordhoff and James Norman Hall were members of the Lafayette Flying Corps of the French Foreign Legion.
Reprints

The Panama Canal (Table of Contents: 4)

First Line of Dialogue or Text
A bridge of water joining the Atlantic with the Pacific Oceans across the Isthmus of Panama had been the dream of men since 1501.
Genre
historical
Reprints

The Great Houdini (Table of Contents: 5)

First Line of Dialogue or Text
In 1900, a brash young American walked into London's Scotland Yard and told the superintendent…
Reprints

"Read the best in the world's finest juvenile publication" (Table of Contents: 7) (Expand) /