First Line of Dialogue or Text
Do something quick or it will get us too...
Genre
science fiction
Keywords
spaceship 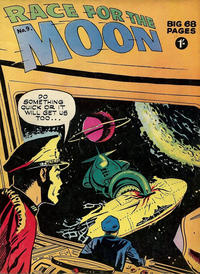 The Man Who Stole Air (Table of Contents: 2)

First Line of Dialogue or Text
What strange things did Eric Fowler see in the air around us.. which no one else saw?
Genre
science fiction
Characters
Eric Fowler; Harry (G.S.A. Agent - voice on radio only); George Croft (G.S.A. Agent)
Synopsis
Former scientist Eric Fowler is seen collecting samples of air. George Croft is assigned and tails him back to his house. Inside he sees Fowler talking to tiny aliens. Suddenly the tiny aliens are giants and they head towards the nearby army base. Fowler recovers from being stunned and tells Croft that he tried to trick the aliens into giving him their secrets by promising them helium which they need for fuel. The aliens have a magnifying device which created the giant images. Croft disables the device and the giants disappear. The aliens are given helium and leave Earth.
Reprints
Keywords
giant aliens; helium; spaceship; tiny aliens

The Curse of the Fire God (Table of Contents: 4)

First Line of Dialogue or Text
Pete Marek thought he had it made!
Genre
fantasy-supernatural
Characters
Pete Marek
Synopsis
Pete Marek has stolen a million dollars and escapes to Peru where he is pursued by detectives. He plunges into the jungle but his path is blocked by a festival to the Fire God. Told that the alternative route is 5 miles away he pushes through despite warnings the Fire God will seek him out. Further along a bolt of lightning sets fire to the track forcing him to change course. He then tries to cross a rope bridge which catches fire. He decides to go further up into the snow. The detectives see smoke coming from a hut and find Marek. His glasses have focused the sun's rays causing a fire.
Reprints
Keywords
Fire God; glasses

First Line of Dialogue or Text
All these crazy contraptions are scientifically impossible! Could this be... witchcraft?
Genre
fantasy-supernatural
Characters
Professor Amos Todd
Synopsis
Amos Todd sells tickets to his Museum of Worthless Inventions when he sees a flash of light come through the rain clouds. He shows a gold making machine and then a power pill which converts water to gasoline. He is surprised when the water suddenly bursts into flame. In the storm he helps a doctor's car with a power pill and water. He finds all inventions now work and fixes the hospital generator with a perpetual motion machine. Back at the museum criminals steal the gold making machine. Todd follows using mechanical wings which stop working as he lands. All machines return to uselessness.
Reprints
Keywords
perpetual motion; power pill

We Hunted the Forbidden Treasure (Table of Contents: 8)

First Line of Dialogue or Text
We had probed the murky depths of the seven seas--trekked across the scorching deserts--and invaded the frigid Arctic in the quest of buried fortunes...
Genre
fantasy-supernatural
Characters
Clyde King; Andy; Boswell (curio dealer); Antib; Parker
Synopsis
An ancient Aztec curse seems to follow an expedition that seeks to find a lost treasure.
Reprints
Keywords
Aztec; Mexico

Jim Mooney signature on left hand side of splash panel, two thirds of the way down.

First Line of Dialogue or Text
Gosh Bob, we're lost! What do we do now?
Genre
advocacy; maths & science
Characters
Bob; Ted
Synopsis
Bob and his friends are saved from being lost in the woods because Bob knows how to find Polaris, the North Star.

Appeared across a range of US DC comics in November/December 1958.

We Were 20th Century Cavemen (Table of Contents: 11)

First Line of Dialogue or Text
There on that deserted island, we were ready to pull back the dark veil suurounding one of the greatest mysteries of life --the secret of eternal youth!
Genre
science fiction
Characters
Dr. Cooper; Nora; Jim
Synopsis
A scientific experiment gone wrong revives the prehistoric world in the present.
Reprints
Keywords
dinosaurs; pterodactyl; rejuva-ray

The Saint / promo (ad from the publisher) / 0.33 page (report information)

Job Number
S1421
First Line of Dialogue or Text
Perhaps it was all a dream!
Genre
fantasy-supernatural
Characters
Carl Adams; Frank Sawyer
Synopsis
The American Destroyer Jeffries is torpedoed. Adams and Sawyer float for six days in a lifeboat until they see an old sailing ship. They climb aboard carefully as the ropes and wood are rotten. They walk the decks without the crew seeing them. They find a book written in Dutch - they are on board the Flying Dutchman. They decide to escape and fall in to sea when a railing breaks away. They float for days clutching the railing. They are picked up by a Navy cruiser. Their papers show they were crew on the Jeffries which sank in WWI! So, where have they been since 1918?
Reprints
Keywords
Flying Dutchman; torpedo

Following discussion on GCD Main, inker changed from Mort Meskin to George Roussos with a query on Meskin as inker. Meskin and Roussos had a collaborative relationship from the 1940s onwards (information from Lambiek).

I Was Earth's First Exile (Table of Contents: 16)

First Line of Dialogue or Text
In one moment, I was the first man to pilot a rocket into orbit--and soon after I found myself engaged in a strange battle on an alien world!
Genre
science fiction
Characters
Captain "Ferg" Ferguson; Dzuga (dictator)
Synopsis
An astronaut on a test flight is transported to a distant planet where he gains super-powers and helps defeat a dictator.
Reprints
Keywords
dictator; spaceship; superpowers

The Swami of Broadway (Table of Contents: 18)

First Line of Dialogue or Text
From the mysterious jungles of Bengal to the glittering lights of an American city came the Swami--bringing with him a magic emerald possessing the power to unlock the forbidden secrets of the future!
Genre
fantasy-supernatural
Characters
Dean Hall; Orry Kane; swami [Jones]
Synopsis
Dean Hall and Orry Kane are on a trip in Bengal. Kane tries again to persuade Hall to sell him his theater, Hall again refuses. They enter a village and see a swami who predicts an elephant stampede. The square is emptied just in time. A month later Hall auditions acts for his theater when the swami appears on stage. He makes two predictions which comes true. Later the swami is asked to appear at the theater and he says he will not enter as it will be struck by a meteor. Hall sells the theatre to Kane and leaves. The swami is then revealed to be a fake. Then a meteor hits the theatre.
Reprints
Keywords
swami

For the best in Western reading select a novel from our exciting new range! (Table of Contents: 20) (Expand) /