First Line of Dialogue or Text
Horace Whickle, I will give you unlimited power!
Genre
fantasy-supernatural
Characters
Horace Whickle; Vision

Cover represents a scene from "The Test of Character" although is not copied from any story panel. 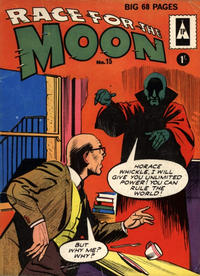 The Test of Character (Table of Contents: 2)

Job Number
3392
First Line of Dialogue or Text
Horace Whickle I shall give you the gift of complete power over the affairs of men!
Genre
fantasy-supernatural
Characters
Horace Whickle; Vision; Mr Dunston (Horace's boss)
Synopsis
Horace Whickle has worked as a bookkeeper for 22 years. Dunston calls Horace into his office and tells him to work late to find a wrong figure in an account. Later at home a Vision appears to Horace and tells him he has the power to control men and to use it for good. Horace quickly makes Dunston bankrupt and then takes over every company in the country. The Vision appears again and tells him he has become vain and to do good. Horace becomes the most powerful man in the world and declares himself Emperor of the World. Then the alarm clock wakes him up and he goes in to work as normal.
Reprints

[Giants of the Telescope] (Table of Contents: 3)

Lighthouse of Space! (Table of Contents: 4)

First Line of Dialogue or Text
The mystery ship came from the great depths of space beyond the solar system!
Genre
science fiction
Characters
Commander Eric Mann; Captain Alan Carter; Zarran Commander (aggressive alien); Kull Council speaker (peaceful alien)
Synopsis
The Kull are a peaceful people who have discovered random anti-matter blotches throughout space. To warn travelers of the blotches they station lighthouses in their vicinity. One of the lighthouses drifts into our solar system. Two Earthmen investigate the lighthouse and become prisoners when it is retrieved by the Zarran, enemies of the Kull. The Zarrans rig the lighthouse with crystals to absorb the deadly radiation from the blotches and beam it onto the Kull planet. The Earthmen help the Zarran defeat the effects of the radiation and are rewarded with knowledge to take back to Earth.
Reprints

The Ironclad Will! (Table of Contents: 6)

First Line of Dialogue or Text
Am I dreaming? It's... his face!
Genre
fantasy-supernatural
Characters
Jude Tyndal; Harry Tyndal; Laura; Philip Tyndal
Synopsis
Jude Tyndal's heirs get exactly what they deserved, even if it is impossible to explain how he accomplished it.
Reprints

The Strange Ones! (Table of Contents: 7)

First Line of Dialogue or Text
Those lights! They're blinding me! I'm losing control!
Genre
science fiction
Characters
Glenn Parker; Olga Parker; Family doctor
Synopsis
Glenn Parker is driving home when two strange lights cause him to crash his car. The two lights are concerned that Glenn does not die. When Glenn wakes up he drives home. Over the following weeks Glenn is obsessed with building a strange machine. Olga is concerned about Glenn and calls the doctor who hypnotises Glenn. Glenn reveals that the machine is to give physical form to the lights who want to invade Earth. The doctor and Olga rush to the machine just as two aliens emerge. There is a brief fight and the aliens accidentally destroy the machine and disappear. The invasion is over.
Reprints

First Line of Dialogue or Text
You can step out of everyday life--right into the midst of the strangest adventures you dreamed of!
Genre
fantasy-supernatural
Characters
Eddy Brewster; Brenda Trent; Jed Hoffstra; Dr. Martin
Synopsis
Eddy and Brenda have grown up as neighbours and friends. But Brenda wants someone courageous as a boyfriend and all-state quarterback Jeff takes her out as well. Brenda confuses her dates and all three go out together to the private closed house of Dr Martin. The Dr shows them his museum exhibits and, after Jed and Brenda have left, challenges Eddy to track down the Georgio tiara. Eddy visits the eras of the exhibits and finds the tiara defeating obstacles on the way. Eddy meets Jed and Brenda, Jed challenges Eddy but he now has courage and defeats Jed. Brenda is happy with her real man.
Reprints
Keywords
Georgio Tiara

Call in the Night (Table of Contents: 9)

First Line of Dialogue or Text
It happened on a frosty, clear night---it started with a telephone message---
Genre
fantasy-supernatural
Characters
John W. Crane (Fire chief); Mr. Parkins
Synopsis
Chief Crane receives a phone call advising of a fire at 346 Elm. When the fire equipment arrives they find that someone is inside, old man Parkins. The firemen save Mr Parkins. Later, when they are making out the fire report, Crane asks Parkins if he knows anyone called Danny, as he made the call. Parkins tells Crane that Danny is his son and that he always looks after him. Crane wonders why Danny is not present and Crane says that his son died in 1942. Further attempts to trace the phone caller are unsuccessful.
Reprints

The Intruders (Table of Contents: 10)

First Line of Dialogue or Text
When man finally does land on the moon--who will own it?
Genre
science fiction
Characters
Marsh; Loomis
Synopsis
Marsh urges his men to hurry up evacuating the moon dome as the next time the moon-men attack it may be too late. Loomis disagrees and says they should fight. Suddenly an attack starts and the dome is damaged leaking out life sustaining oxygen. While the repairs are taking place Loomis sneaks out with a rifle. Loomis is ambushed by the moon-men but a warning shot by Marsh, who has followed, scares them off. They are then pursued and just get back to the dome in time. A rocket arrives for the evacuees and leaves behind the moon-men who are men and women that can live without oxygen.
Reprints

First Line of Dialogue or Text
Many harmless birds and animals were once regarded with horror and loathing by superstitious people throughout the world!
Genre
non-fiction; horror-suspense
Reprints

Animals listed as bad omens are owl and magpie. A good omen is a cuckoo. The howling of dogs was associated with the approach of death. It was thought that a mouse held the soul of a person when asleep. A black cat was depicted as a witch's companion.

First Line of Dialogue or Text
Consider the case of Willie Grant who decided to change his lot in life...
Genre
fantasy-supernatural
Characters
Willie Grant; Mr Winkler (Willie's boss); Joe (Willie's friend); Victor Segurido; Laura Segurido (Victor's sister); Juan (local worker)
Synopsis
Willie and Joe are bawled out again by Mr Winkler. They try for a new life and stow away on a ship which sinks in a storm. Only Willie is found by Victor and Laura on an island. They offer him the role of overseer on their sugar plantation where the workers are treated as slaves. Willie continues this regime. Juan escapes to tell of the situation. The Seguridos tell Willie that he will take all the blame for keeping the workers in bondage. Willie decides to get out and a month later is back with Mr Winkler who shows Willie a newspaper. The Seguridos have died in an earthquake.
Reprints

The Valley of Forever! (Table of Contents: 13)

First Line of Dialogue or Text
It had to be a mirage, a dream. But if it was, John Evans is a madman!
Genre
fantasy-supernatural
Characters
John Evans; Williams (Evans' companion); Philip Kent
Synopsis
Evans and Williams are exploring the Arctic when they see a lush valley. The ice collapses and they fall down. They are carried to a city where they meet Philip Kent. He tells them they can live happily for five hundred years if they wish. Williams is happy but Evans tells Kent he doesn't believe him and he wants to leave. Kent says others will then come and he will not help him. Evans finds clothes and food and attempts to escape but fails. Kent says he will now help Evans to a training station. When he tells his story he finds out that Kent went looking for the valley 150 years ago!
Reprints