First Line of Dialogue or Text
I warned you the robotry would soon revolt. Now hurry! Our only hope is the underground cave.
Genre
science fiction

Front cover represents a scene from "Journey's End" but is not a redrawing of any panel. 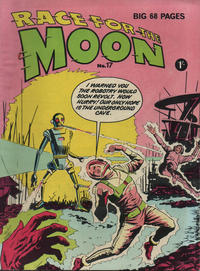 Job Number
2814
First Line of Dialogue or Text
In the beginning they had made robots to help their race!
Genre
science fiction
Characters
Ejvan (peoples' leader)
Synopsis
Ejvan tells his people that they should not have so many robots and is shouted down. Unable to convince his people he builds a giant spaceship. The robots rise up as feared and Ejvan leads his people off their planet. They approach Earth full of misgivings in case they are met with violence. They land, step out on to the ground and are surrounded by tanks and other weapons. They wait for the weapons to fire and then Ejvan's child toddles forward carrying a rag doll. A little Earth child comes forward and they start to play together. The tension is gone and they find welcome on Earth.
Reprints
Keywords
alien; robot; spaceship

The Lost Tribe! (Table of Contents: 3)

Job Number
3617
First Line of Dialogue or Text
Bill Judson's television program "We Accept the Challenge" was a popular show and much of the credit had to go to young Dick Travers, chief cameraman!
Genre
adventure
Characters
Dick Travers; Dick Travers' boss; Galu (local guide); Inca leader, Inca tribesman
Synopsis
Dick Travers is sent by his boss to Peru to film a lost tribe. Travers says if they're there he'll film them. Three days later Travers is in Peru. Galu refuses to take him further as his tribe are afraid to go in the hills. Travers goes on alone and meets an Inca tribesman. He is shown a village and offered a drink before he starts filming. The village is primitive. When he later shows the film to his boss there is only the tribesman in the picture. Back in Peru the tribesman tells his leader that the potion never fails. The leader says this way they will keep their existence secret.
Reprints
Keywords
Incas; Peru; potion

The Impossible (Table of Contents: 4)

First Line of Dialogue or Text
I must be out of my mind! How did I get here?
Genre
science fiction
Characters
John Sawyer; police sergeant
Synopsis
Sawyer wakes up on the floor of a room he's never seen before. He focuses by recalling his name, he's a research scientist and he's from 1958. Looking outside he sees futuristic buildings and goes to the police who tell him it's 2008. They take him to his house but it is now a condemned ruin. The sergeant tries to take Sawyer back but Sawyer escapes and goes back to the room where he finds a notebook. The sergeant appears and takes the book while Sawyer escapes again. Sawyer follows the sergeant home and learns that he hasn't time travelled but has been rejuvenated by his own experiment.
Reprints
Keywords
rejuvenation; time travel

The Test (Table of Contents: 5)

First Line of Dialogue or Text
Sometimes even people in love do not know how much they mean to each other until they are faced with...
Genre
fantasy-supernatural
Characters
Ted; Margo; Mr Rêve
Synopsis
Ted and Margo are lost on honeymoon in a car. Ted tells Margo that the Cajuns have a legend that those in love must come to the Bayous to be tested. The find a beautiful house and ask if there is accommodation. Mr Rêve says yes and that he can see that they are in love but it has not yet faced the test. They climb the stairs, a bat scares Margo who falls down. Ted carries her outside and a storm whips up. Ted tells Margo they will live or die together. They wake up in the car and drive off. They see a car with Mr Rêve inside who tells them they have passed and this is not a dream now.
Reprints
Keywords
honeymoon

Rêve in English is dream.

First Line of Dialogue or Text
One of the newest army devices is the "Buck Rogers", a personal rocket belt that enables troops to run at least 35 miles an hour for several seconds without tiring;
Genre
non-fiction
Reprints

Science fact on army "Buck Rogers" personal rocket belt, the speed of an electron in a hydrogen atom and how long an eye takes to blink

Beyond the Reach of Time! (Table of Contents: 7)

First Line of Dialogue or Text
The year was 1942, and as young Tom Powers said goodbye to those he loved, unknown to him he stood on the brink of a strange and mystifying experience!
Genre
fantasy-supernatural
Characters
Tom Powers; Madge; Mrs Powers (Tom's mother); Henry Powers (Tom's father); Doctor Balsom (practicing psychiatrist); Gloria Saunders
Synopsis
Tom says goodbye to his parents and girlfriend as he goes off to war. Upon return he is polite to Madge but not in love and they stop seeing each other. Tom's mother regrets this but Henry says Tom is just the same. As the years pass he doesn't age! He goes to Doctor Balsom who hypnotises him. Doctor Balsom says that Tom needs to visit England. Tom hears church bells and remembers that he met Gloria and they fell in love. A bomb exploded and when Tom came round he forgot Gloria and went back to his unit. Gloria shows up and she and Tom embrace. Tom suddenly reverts to his true age.
Reprints
Keywords
amnesia; WW II

The Last Role (Table of Contents: 8)

First Line of Dialogue or Text
He was a lonely old man who had nothing left except some yellowed news clippings in a crumbling scrap book and his memories...
Genre
fantasy-supernatural
Characters
Bill Saunders; Ted; Lew Chase; Caroline (Lew's wife in a photograph)
Synopsis
On a film set Bill complains to Ted about the cameras not rolling. Ted says that the man they hired hasn't shown up and they need a replacement. He suggests Lew Chase. Bill is doubtful since Lew's wife died. Ted discloses that Lew is his father. Ted persuades his father to appear. Later Lew promises his wife's photo that he will make her proud and then collapses. Next day Lew shows up, says he has an important appointment and quickly performs his routines. Tired, he goes to the dressing room from which he disappears. A phone call from Lew's landlady then reveals he died last night.
Reprints
Keywords
film set

Story of a Miser! (Table of Contents: 9)

First Line of Dialogue or Text
It was as strange an adventure as had ever befallen a man, when Mark Brinkley was sent back into his own past---
Genre
fantasy-supernatural
Characters
Mark Brinkley; Eleanor Brinkley (Mark's wife); Wayne Brinkley (Mark's ancestor); Edward Brinkley (Mark's father); Mrs. Brinkley (Mark's mother); Abraham Lincoln; native Indian chief
Synopsis
Mark Brinkley only wants to make money and appears to care for no-one else - except Eleanor, whose ring he wears. She has said no to marriage for 20 years because of his meanness. At home Mark falls from a ladder moving a painting of Wayne Brinkley. Wayne appears and then takes Mark through history to look at various events to show him the value of friendship over money. At each stage Mark tries to make money but is caught out. Eventually he realises his mistake and gives Wayne his ring. He wakes up and proposes to Eleanor who accepts. The painting now shows Wayne wearing Mark's ring.
Reprints
Keywords
time travel

The Mystic (Table of Contents: 10)

First Line of Dialogue or Text
He could foretell the future - but an ironic twist of fate was to turn his own power against...
Genre
fantasy-supernatural
Characters
Indian mystic; Paul Anderson; Lewis (Paul's ex-boss at a jewellers)
Synopsis
The mystic tells Anderson he can teach him no more and it should be used for good. Back in New York Paul uses his ability to take revenge on Lewis who fired him for incompetency. He punches Lewis out, steals money and then simply walks out. He then walks in to a bank and takes the opportunity to steal from the vault when the guard collapses. He takes a train out but then gets a feeling there will be a crash. He pulls the emergency cord and jumps out but is trapped when another train crashes in the back. In hospital the police tell him that it was pulling the cord that caused the crash!
Reprints
Keywords
premonition

The Creatures in the Volcano (Table of Contents: 11)

First Line of Dialogue or Text
There is a story that Grandfather used to tell me when I was a child...
Genre
science fiction
Characters
Tubuai; Mauiki
Synopsis
A chief of a Pacific island tribe finds aliens in a volcano preparing to conquer Earth. He thinks his people will not believe him, so he instead agrees to sell the island to the US for nuclear tests, which destroys the aliens.
Reprints

First Line of Dialogue or Text
Nearly everybody has a more or less uneasy feeling that breaking a mirror will not help your luck for at least seven years.
Genre
non-fiction
Reprints

First Line of Dialogue or Text
It was only a lump of crude quartz, but through a strange scientific accident the entire world was to be threatened by---
Genre
science fiction
Characters
Doctor Falsom; Warren; Peter Mason
Synopsis
Falsom experiments with electricity on a lump of Quartz. It tingles in his hands and then causes a microscope to disappear. Tests show it only works on inorganic items. Also no further special quartz can be created. Falsom calls a special scientific meeting. His credulous colleagues are quickly convinced and Mason, the group's President, tells Falsom he must hand the quartz over to the authorities. Falsom snatches the quartz and runs home. A foreign spy tries to steal the quartz. Two FBI agents burst in and the quartz drops to the floor, breaks into two parts which destroy each other.
Reprints

The Ghost Ship of Space (Table of Contents: 14)

Job Number
[T-156]
First Line of Dialogue or Text
The name's Frank Brandon!
Genre
science fiction
Characters
Frank Brandon; Ben; Charlie; Smitty
Synopsis
A reporter investigates a series of spaceship disappearances and is captured by primitive aliens. He forces them to free him by pretending that a simple gadget is a powerful bomb.
Reprints

For the best in Western reading select a novel from our exciting new range! (Table of Contents: 16) (Expand) /