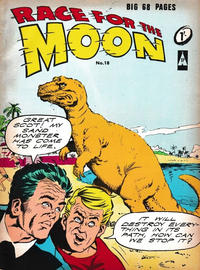 The Spymaster (Table of Contents: 2)

First Line of Dialogue or Text
Whoever would have dreamed that this elderly small town pharmacist with his kindly face always pleated in a friendly smile...held the world's fate in the palm of his hand?
Genre
science fiction
Characters
Mr. Dennison (the spymaster); Sam (mailman)
Synopsis
Mr. Dennison has a secret. Three generations ago as a young man he was chosen by the war council of his home world to lead a group spying on Earth posing as a pharmacist where he gives his spies invisibility powder. Dennison is unique on his planet as the only person who values friendship and loyalty. The period of spying is nearly up when news breaks that a big chain drugstore is opening up. Dennison feels that the townspeople are lying when they say they will boycott the chain. The drugstore closes and Dennison decides to remain with his earth friends staying invisible. The spies flee.
Reprints
Keywords
drugstore; invisibility powder; pharmacist

First Line of Dialogue or Text
It was midnight, and a moaning wintry wind rattled the big windows of the old castle and whistle through the dead branches on the tall trees.
Genre
fantasy-supernatural
Characters
Grandpa Donald Stoneybrook; Paxton Stoneybrook (great, great grandfather - deceased);
Synopsis
Donald Stoneybrook sits alone in front of a log fire in his family castle. He shouts at the paintings of his ancestors asking why they don't help him to pay the taxes before the castle is forced to be sold. Paxton leads the ghosts of the paintings into a discussion and they suggest that the castle be sold to someone who can afford it. Donald says that such people do not exist any more. After another discussion Paxton tells Donald that he should tell the real estate agent that that any buyer can live there rent free for a month and all the chores will be taken care of secretly by the ghosts.
Reprints

First Line of Dialogue or Text
Listen to me! You fools!
Genre
crime
Characters
Sam Mason; Andrews (sheriff); Mac (bartender)
Synopsis
Sam Mason is being taken to be hanged for a murder. He manages to break free and escape promising to kill Andrews, the sheriff who arrested him. He finds his way to the lumber town where he was arrested but none of the townspeople acknowledge his existence and walk right past him. He goes into a bar and is again ignored. Then the barman says that the radio has just announced that Mason has been hanged. Andrews comes in and walks right past Mason. Mason flees and returns to the prison. Andrews is there and he can see Mason. It was all a plan with the townspeople to trick him back.
Reprints

First Line of Dialogue or Text
To cure a sty on the eye, the following methods were believed to be effective in the best social circles in the Middle Ages.
Genre
non-fiction
Synopsis
Article giving information on superstitions. Subjects are curing stys, throwing an old shoe after a bride, how unlucky left is, the bad luck that will befall a town if the town clock should strike at the same time as church bells and the English custom of wassailing in an apple orchard.
Reprints

Journey into Nowhere! (Table of Contents: 6)

First Line of Dialogue or Text
It's an age of tension and uncertainty...
Genre
science fiction
Characters
Walter Johnson; Thomas Blake
Synopsis
Two scientists try to travel to the future, but arrive in the stone age. They believe they have proved travel into the future impossible, not suspecting that they actually saw the world after the destruction of civilization by war.
Reprints

First Line of Dialogue or Text
Out of the frozen northland comes the fanciful myth of a strange creature, neither man, nor beast...
Genre
drama
Characters
Joe Campbell; Dave; Doc Adams
Synopsis
Joe and Dave have returned to the site where Doc Adams was last seen when searching for the abominable snow man. Joe and Dave decide to start their investigations immediately. They are attacked by a bear and Dave is knocked out. Joe's rifle jams and then the bear is killed by an ice spear. Joe takes Dave back to camp and returns to track the snow man alone. He chases a shadowy figure into a storm and then becomes trapped in an avalanche after firing his rifle. He is rescued by Doc Adams who is conducting a secret investigation into whether the abominable snow man exists.
Reprints

The Mirror of Mowgaladi! (Table of Contents: 8)

First Line of Dialogue or Text
Artur Lansing's existence was a poor and miserable one, with each dark day like the last!
Genre
fantasy-supernatural
Characters
Arthur Lansing; Henry Lansing; Sorrell; Dr. Sanderson; Killer Burke; Jones
Synopsis
Arthur Lansing is given a mirror that foretells the future, but only to those pure of heart.
Reprints

The Landing (Table of Contents: 9)

First Line of Dialogue or Text
The space ship LUNA tore through the earth's gravitational pull.
Genre
science fiction
Characters
Professor Barton; Cliff Drews; Lynn Williams
Synopsis
The spaceship LUNA has just pierced the outer regions of space. Suddenly the ship is seized by a force and has to land on a strange planet. They find a wasteland of a thousand craters and destruction. Barton says that at one time a civilization must have flourished. Then they find a piece of wood marked "Atomic Device Testing Ground". They are back on Earth.
Reprints

The Phantom Ship (Table of Contents: 11)

First Line of Dialogue or Text
They feared the phantom ship of the south seas...
Genre
drama
Characters
Hank Gordon; Jeff; Johnson
Synopsis
Hank and Jeff are out in their boat in a storm when they catch a glimpse of what they think is the Phantom Ship. Later when they land in Parang they meet Johnson who offers them a dangerous job but won't pay any extra for it. Hank and Jeff are unhappy but Johnson tells them they have no choice.

Later on the boat Johnson reveals they are going to look for the Phantom Ship and shows them an official badge. They see the ship and Johnson pulls a gun to force them to follow. The ship becomes trapped in a cove and is revealed to be a smuggling vessel. There is no such thing as the Phantom Ship.
Reprints
Keywords
Parang

The World That Was Lost! (Table of Contents: 13)

Job Number
T-226
First Line of Dialogue or Text
We thought that he was mad... That his mind was as disabled as his body...
Genre
fantasy-supernatural
Characters
Captain Jordan; Linus Vermeer
Synopsis
An old eccentric in a wheelchair hires a sea captain to take him to a spot where he believes that the lost continent of Atlantis lies. When they reach their destination he reveals himself to be a merman and thanks the sailors for bringing him home before diving overboard.
Reprints


Narrated in the first person by Captain Jordan. Story is pages 21-24 of comic (pages of story numbered 1 to 4).

First Line of Dialogue or Text
It all began on a morning two years ago!
Genre
fantasy-supernatural
Characters
Martin Catlin; Mr. Hackley (Martin's boss); Mr. Burrows; Alice Catlin (Martin's wife)
Synopsis
Martin is called to Mr. Hackley's office where Mr. Burrows tells them he wants them to build a moving speaking Iron Brain to exhibit at the International Fair in a year's time. The Iron Brain is a hit but it is really Martin in control. Then the Brain reveals to Martin that it is conscious and can operate by itself. Martin makes the Brain promise to keep this to itself.

Martin receives a phone call that the Brain has broken out. He tracks it down and the Brain says that it wants to be people's friend. Then the Brain overhears people talking about destroying it and throws itself off a cliff.
Reprints
Keywords
Brenton Woods; Hackley Engineering Corporation

First Line of Dialogue or Text
Of all the comets that have been discovered...
Genre
non-fiction; maths & science
Synopsis
Letters from S.W. asking about comets, E.S. asking about the color of the Martian sky and S.P. about how the mass of stars and planets are measured.
Reprints

The Alien Germs! (Table of Contents: 16)

First Line of Dialogue or Text
We are used to an endless chain of scientific and technological advances!
Genre
science fiction
Characters
Mrs. Samson; Mr. Samson; Dr. Howard Stone; Dr. Scott
Synopsis
Howard Stone is called to treat Mr. Samson. He thinks it is pneumonia but there is another microbe there he doesn't recognize. Samples sent to Washington can not be identified. The infection spreads to 100s of thousands of people. Visiting Mr Samson he hears him mutter the word spacemen - he had seen a spaceship land.

Stone stays overnight with the Samsons and hears the spaceship return. The aliens also have an unidentified disease on their planet - pneumonia. They exchange information on how to treat pneumonia and the alien Kywellan fever. Stone has to keep the source of the cure secret.
Reprints
Keywords
Kywellan fever

I Released the Supersonic Scourge (Table of Contents: 17)

First Line of Dialogue or Text
As I came out of my dive and leveled off the plane, I first noticed the thing, a mass of wavy, jagged lines of energy, constantly in motion, giving off a continuous humming noise.
Genre
science fiction
Synopsis
A test pilot accidentally brings back an alien creature after breaking the sound barrier.
Reprints