An HRN 167 edition exists, with differing promos on the inside covers.
This issue has variants: 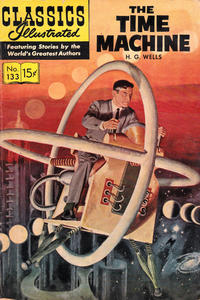 First Line of Dialogue or Text
Scientific people know very well that time is only a kind of space.
Genre
science fiction
Characters
Narrator [the Time Traveler]; Wells' unnamed friends; Eloi (people from over 800,000 years in the future); Weena (girl, a Eloi); The Morlocks (villains)
Synopsis
The narrator is late to dinner with his friends, but shows up, clothes tattered, and he tells them the story of his time machine, travel into the very distant future, falling in love, battling the Morlocks, and his arrival back into the present. His only proof to them were flowers given to him as a present from Weena.
Reprints