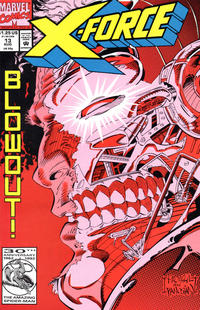 Everything Hits the Fan (Table of Contents: 1)

In a company known for clever credit captions, this issue contains one of the cleverest as Editor-In-Chief Tom DeFalco is pegged as the "Fan Cleaner" probably in reference to the fact that "superstar" artist Rob Liefeld left the company to join his buddies Todd McFarlane, Jim Lee and Erik Larsen to form Image, an indication to Marvel that something had certainly hit the fan.