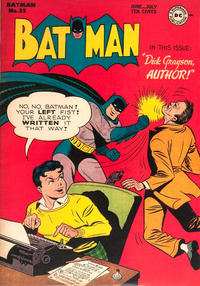 H Is for Hippopotamus (Table of Contents: 2) (Expand) /

Nine Lives Has the Catwoman! (Table of Contents: 3)

First Line of Dialogue or Text
There's an old saying that no matter how...
Feature Logo

Batman with Robin - The Boy Wonder [40's face]
Genre
superhero
Characters
Batman [Bruce Wayne]; Robin [Dick Grayson]; Commissioner James Gordon; unnamed prison matron; The Catwoman [Selina Kyle] (villain); Catwoman's gang [Mousey; Mager; Mike; Pete] (villains); Carl Gibbs (villain, millionaire)
Synopsis
Catwoman arrives at the state women's prison and uses her catseye on her guard to make her escape. However, when she returns to her digs and attempts to put her gang back together, most want no part of her since Batman always defeats her. So the Catwoman decides on a daring plan: to prove to her boys she has the nine lives of a cat and cannot be killed!
Reprints
Keywords
Cat-acombs; Catseye; Gotham City; infra-red filter lenses; Wayne Mansion

Catwoman adopts the classic purple and green costume with mask instead of Cat's head.

Both art credits confirmed by Jack Burnley (to Craig Delich) and Bob Kane (to Joe Desris).

Batman with Robin - The Boy Wonder [40's face]
Genre
superhero
Characters
Batman [Bruce Wayne]; Robin [Dick Grayson]; Murray Wilson Hart (master showman); Mr. Breach (big-game hunter); Stephen Chase (villain, big-game hunter)
Synopsis
Batman and Robin are challenged to a game of "Touch Hunt" on famed Dinosaur Island in return for a gift to charity in the amount of $5000...if they win the game. But they soon discover that they are the prey being hunted...by a very human adversary!
Reprints

The mechanical dinosaur later ends up in the Bat-Cave's trophy room.

This text story was NOT reprinted in the Archive edition.

First Line of Dialogue or Text
This is a fine mess...
Genre
humor

This sequence is NOT reprinted in the Archive edition.

First Line of Dialogue or Text
Did you ever stop to wonder exactly what makes a Batman story?
Feature Logo

We originally credited this story to Sprang alone.

Craig Delich changed those credits to Sprang (layouts), Bob Kane (pencils), and Burnley (inks), saying "There are a few indications that display partial art by Sprang, especially panels 3 and 4 on page 12 (that is Sprang's bat on Batman's chest, not Kane's), and throughout the story, there is no cape knot at Batman's throat (such as seen in the previous two stories by Kane and Burnley). The Robin figures on the splash and first two pages appear to be Sprang's work (as is the cover), and maybe a few other random Robins." In addition, Kane told Joe Desris that these stories were his pencils with Burnley inking him.

However, Martin O'Hearn has identified the penciler as Cooper, not Bob Kane.