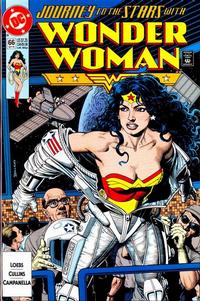 Wonder Woman notes there are "more powerful meta-humans" than she, and that she is unable to fly into space on her own power.

As Diana is unable to speak Russian, she communicates with Natasha by their lingua franca, Greek.

The column begins with a farewell to editor Dan Thorsland, and a welcome to new editor Bryan Augustyn.