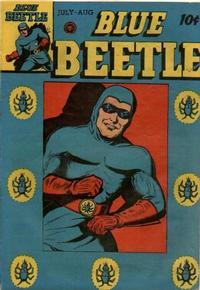 Genre
superhero
Characters
Blue Beetle [Dan Garret]; Mike Mannigan; Joan Mason
Synopsis
The Beetle and his friends go to South America to find a hoard of counterfeit currency originally printed by the Japanese and now the target of U.S. gangsters.

Murder on Stage (Table of Contents: 3)

Genre
superhero
Characters
Blue Beetle [Dan Garret]; Joan Mason; Mike Mannigan; Jimmy Trent (dies); Fu Li
Synopsis
Murder is committed to obtain the Jewels of Kwannon which have been smuggled in from the mysterious orient by a troop of actors.

The Folly of Laughing Lon (Table of Contents: 4)

The Liberty Bell (Table of Contents: 5)

Script credit by Craig Delich, courtesy of the Who's Who, who indicates that Alec Hope was a pen name for Hollingsworth and it appeared on all art that Hollingsworth drew.

The creator of Bronze Man was Alvin C. Hollingsworth, born in Harlem, New York, and was one of the few African-American artists to work in comics during the 1940's and 1950's. At age 12, he assisted on the art chores for the hero known as Cat-Man. He meant for Bronze Man to be of African-American heritage, wearing an iron mask whenever he appeared as Bronze Man, but the published version was caucasian and sans the mask.