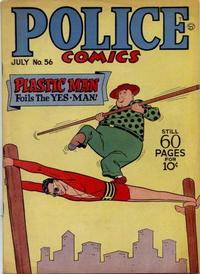 [Signs of Reform] (Table of Contents: 3)

Fire in the Sky (Table of Contents: 4)

Genre
superhero
Characters
The Human Bomb [Roy Lincoln]; Hustace Throckmorton; Yarboe (villain, scientist, death)
Synopsis
A scientist is able to re-create Roy's explosive formula, and when the Human Bomb attacks and destroys the scientist's lair, the villain is destroyed with it.

[The Hooded Ones] (Table of Contents: 5)

First Line of Dialogue or Text
Button your tunic, Drip!
Genre
humor
Characters
Dewey Drip; Sergeant; Maw Drip
Synopsis
Dewey is mustered out of the Army and enjoys his freedom -- until his mother starts bossing him around.

In the very first Dewey Drip strip (Police Comics (1941 series) #1 August 1941), Dewey received his draft notice. The story in #56 is the last one in which he appears in Army uniform.

[The Vengeance] (Table of Contents: 7)