Part of the Bloodlines series running across DC's 1993 annuals.
This takes place in the current Batman continuity.
This issue has variants: 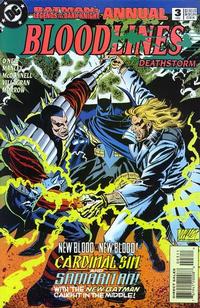 Inside front cover PSA for flood relief after the floods of 1993 that decimated much of the midwestern United States.

The Outsiders / promo (ad from the publisher) / 1 page (report information)

Star Trek: The Next Generation / promo (ad from the publisher) / 1 page (report information)