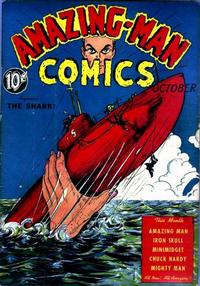 [The Masked Marvel] (Table of Contents: 1)

Located on inside front cover.

First Line of Dialogue or Text
Aman, known to his enemies as 'The Green Mist'...
Genre
superhero
Characters
Amazing-Man [John Aman]; Lucille Peabody (kidnapped girl); Carl Peabody (girl's father, copper magnate); The Great Question (villain); "The Big Boss" (villain, death); Sparks [aka Sparky] (villain, death); Simon Duprey (villain); Norma (villain, death); Barney (villain); Sam (villain, death)
Synopsis
John Aman is taken prisoner by a mysterious "Big Boss" and his gang, who have kidnapped the daughter of a copper magnate for ransom. However, The Great Question turns Aman into the Green Mist and uses him to terrorize the girl's father into paying the ransom, but the good side of Aman wins out and the girl is saved.
Reprints

Title and character information from Lou Mougin (May, 2009). The splash page is partially a origin re-cap for the character. Aman appears in his villainous "Green Mist" guise in this story.

First Line of Dialogue or Text
Enter! Into the home of the Shark...
Genre
superhero
Characters
The Shark
Synopsis
The super-science underwater hero the Shark stops criminals from starting a war in Furvainia.
Keywords
Furvainia; television projector

Title and character info from Lou Mougin, May 2009.

First Line of Dialogue or Text
Lew--what do you suppose has made me want...
Genre
adventure
Characters
Lew; Bobbie
Synopsis
Lew and Bobbie are briefly stranded on an island and fight a brutish wild man.

Also signed - as 'Burgos' - in the final panel.

All information from Lou Mougin, May 2009.

Genre
jungle
Characters
Sandy Thorne; Labu; The Kilanga; Mike O'Conner
Synopsis
Sandy frees the white people who had been imprisoned by the Kilanga headhunters and learns the white trader Lamont was responsible for arming the Kilanga uprising.
Keywords
Congo; headhunters

Title and art credit from Lou Mougin, May 2009.

First Line of Dialogue or Text
Minimidget, the super-midget, caught in a rat trap...
Genre
superhero
Characters
Minimidget; Ritty; Mrs. Kerry
Synopsis
Minimidget and Ritty are placed in the care of an old lady who they have to protect from a burglar. As a reward they are given a toy plane. Minimidget fights with a bird.

Land Beneath the Sea (Table of Contents: 9)

The Ivy Menace (Table of Contents: 10)

Advertisement for a number of items from Johnson Smith & Co.

Located on inside rear cover.

First Line of Dialogue or Text
All in one magazine

House ad for November issue of Amazing Mystery Funnies with illustrations of "The Fantom of the Fair", "Speed Centaur", "The Inner Circle", "Air-Sub D X" and "Don Dixon".