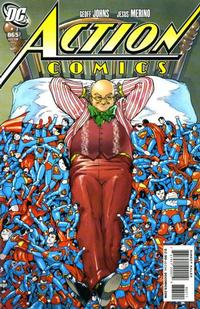 The Terrible Toyman (Table of Contents: 1)

The various Toyman robots resemble versions from the Golden Age, Bronze Age, Superman/Batman book, Byrne era, and Busiek era. The Superman/Batman Toyman (Hiro Okamura) has since appeared again, so that character may not have ONLY been a robot.